Fired Up for Visitors: London’s Heady Heights and Iconic Sights

London’s ageless allure is proving more potent than before as the capital sets course for a post-Covid comeback fuelled by a £6 million campaign to steer domestic tourists to its sights and delights.
When planning our two night trip it was apparent that the absence of overseas visitors - who, in 2019, pumped almost £16 billion pounds into the city - presented great opportunities to bag bargain breaks.
Here’s why there’s never been a better time to soak up the spectacular sights.

Our trip was unprecedented in many aspects. Never during my career living and working in London as a reporter with the BBC, and subsequently returning at least bi-annually for work or leisure trips, has the metropolis been so pleasurable to navigate.
Tortuous tube challenges with fractious commuters and frenzied curtain countdown queuing at theatre bars have been replaced with civilised travel experiences and limited venue capacity.
Snarls have been swapped for smiles from those working in the hospitality sector and people in general appeared more tolerant, courteous and kind.

Thrills and Spills at 443 feet

An adventure on the London Eye - the world’s largest Ferris wheel at 1,004 feet high - was the perfect way to get Steve’s birthday celebration trip off the ground.
Trepidation (I don’t do heights) gave way to excitement as we marvelled at the jaw-dropping views of the Millennium landmark during the 30 minutes ride in a spacious pod which we shared with just one other couple.
Viewing attractions include the Houses of Parliament, Big Ben, Westminster Abbey, the Shard, Buckingham Palace, The Tower and The Tower Bridge and St. Paul's Cathedral.

Bird’s eye view of the capital.
Every pod represents one of London’s 32 boroughs, although, due to superstition, number 13 is conspicuous by its absence.
A magnet for over 3.5 million visitors seeking thrills and spills every year, the Eye is the U.K.’s most popular paid tourist attraction. We loved every second and could have stayed on it for hours.

Messin’ About on the River

Back on terra firma, it was time for a cruise on the Thames, home to more than 119 species of fish along with otters, voles, and eels. For keen walkers, the Thames Path (184 miles) is Europe’s longest river walk.

Legendary icon: Tower of London.
We basked in glorious sunshine as the tour took in landmarks including the OXO Tower, The Shard, Tower of London, Tower Bridge, and Greenwich.
‘Wows’ included the mighty HMS Belfast, a powerful destroyer through key periods of World War II and the Korean War. Now a floating museum, the battleship is moored near Tower Bridge.
A true engineering feat, over 11,000 tons of steel, more than 31 million bricks and 2 million rivets went into the bridge’s construction - not to mention the 70,000 plus tons of concrete to support the structure.

Magnificent heritage: St Paul’s Cathedral.
Architectural and historical evidence of London’s cultural standing spans the awe-inspiring St Paul’s Cathedral whose dome is among the most famous in the world.
An important tip before embarking on the river cruise - ensure you get in the right queue as there are several operators.

The raft of highlights included the enjoyment of being among the first theatre goers to mark the reopening of Shakespeare’s Globe for the immortal comedy ‘A Midsummer Night’s Dream’.

The enchanting and ageless plot centres on four people from Athens who become lost in the forest. When spellbound by the mischievous fairy Puck, the two boys fall head over heels for the same girl. In the adage of Shakespeare’s All Well That Ends Well, the magic is reversed and the couples are wedded to the right partner in a colourful celebration.

Striking the right chord: pre curtain jazz.
The cast’s delight at finally returning to the stage of what is lauded as the pulsating heartbeat of London theatre was magical as the socially-distanced performance opened to a fanfare of jazz. Even the ‘Out dammed spot’ hand sanitizer gelled with the theatrical theme.

Originally built in 1599, the theatre hosted performances of Shakespeare’s greatest plays including Macbeth, Antony and Cleopatra, Othello and King Lear. Shareholders included the great man himself who owned a 12.5% stake.
The Globe’s dramatic history includes being reduced to ashes when a special effect went horribly wrong and being destroyed by the Puritans (1642) to make way for tenement housing.
Its 1997 reconstruction on the bank of the Thames near its original site in Southwark comprised a mind blowing 1,000 oak trees from English forests and 6,000 bundles of reeds for the thatched roof.

Banking on success: Shakespeare’s Globe reopens its doors.
The brainchild behind the renovation was the late US actor and director Sam Wanamaker whom I had the privilege to interview while working as a reporter and producer in London.
His passion for the project was humbling and inspirational and he sadly passed away four years before the grand re-opening. For fellow theatre aficionados, A Midsummer Night’s Dream - a comedic delight - was also a major and colourful milestone in London’s emergence from the bleakness of Covid.

Our aim to pack in as many upbeat experiences as possible took us on a virtually empty tube to the much beloved Kew Gardens.
The UNESCO World Heritage site with its world-class research laboratory and own police force - the Kew Constabulary - spans 300 acres with almost 29,000 living plants.
For me the first sight of the enormous water lillies evoked magical memories of The Frog Chorus & Paul McCartney “We All Stand Together” musical favourite with frogs ecstatically spinning and singing on the giant plants.
Back in the real world, it transpires that giant waterlilies were first found in Bolivia in 1801 and later named Victoria amazonica in honour of Queen Victoria.

Kew’s Temperate House features 1,500 species of plants.
No visit to Kew is complete without a visit to the hot house - officially called the Temperate House - which is the largest surviving Victorian glasshouse in the world.
Showcasing 1,500 species from five continents and 16 islands, the Grade I listed building houses some of the world’s rarest and most threatened temperate plants in temperatures above 10°C. Be sure to have water as the hot house lives up to its name.

Spectacular plumage: Kew’s resident peacock.
The spontaneous and unexpected always enliven any experience. I was absolutely beside myself with excitement when, in the Japanese area, a peacock appeared out of nowhere. Staging his own performance, he unveiled his magnificent plumage and proudly strutted his stuff to a captivated audience.

Oriental flavour: the ten-storey Pagoda.
Continuing with all things exotic, the anticipated tranquillity of the Japanese landscape did not disappoint.
We were bowled over by the impressive ten storey brick Pagoda which, having undergone a major transformation project to restore its 18th century grandeur, towers over the gardens at 163 ft high.
It is adorned with 80 dragons - reported to have been collateral to settle gambling debts of King George IV in 1784. Private tours can be arranged to ascend the 253 steps to the viewing gallery which offers spectacular views across London.

London calling: iconic skyline from the Royal Lancaster Hotel.
The campaign to lure domestic tourists to London’s delights is a win-win for bargain hunters - as we discovered when bagging a room (we were upgraded because of Steve’s birthday) at the swish 5 star Royal Lancaster Hotel opposite Hyde Park for two nights.
The hospitality at one of Europe’s leading venues was wonderful and also delicious birthday truffles which went down a treat while savouring the views.
A great alternative to the hotel breakfast (an additional £29) is to pop across to a cafe in Hyde Park and enjoy smoked salmon and scrambled eggs for a fraction of the cost.

Glamorous and amorous: London by night.

Wining and dining in London continues to satiate all appetites - its diverse nightlife is internationally renowned. For us the buzz of strolling along the Southbank with its bars and ‘razzle dazzle’ was the end to a perfect day.

Heart of Government: The Houses of Parliament.
With 2,000 years of history London’s eclectic and hypnotic culture never ceases to weave its magic. Our 54 hour action packed visit as the ultimate tourists left us energised, exhilarated and hungry for more.
Magical and memorable in so many ways - it was also the first time we were in prime position from the London Eye to look down on the politicians!

One thought on “London’s Heady Heights and Iconic Sights ” 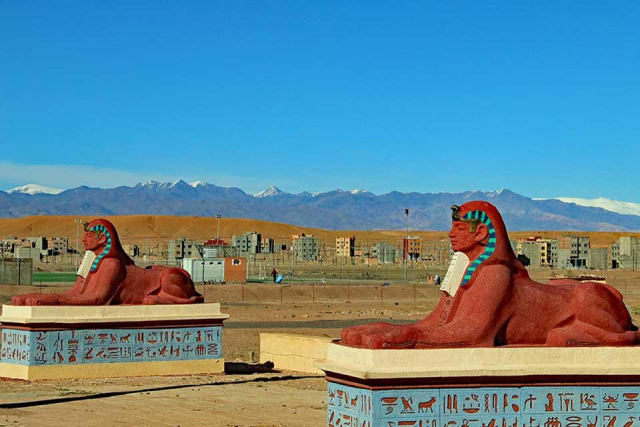 Europe
Urban Decay to Star of the Day:...

Europe
Versailles: A Sensuous Feast of...